Almost half of the waste that families throw away is compostable and can be used as organic garden fertilizer. When we dispose of organic waste by throwing it in the rubbish bin, it ends up in a landfill instead. Organic waste at a landfill rapidly breaks down and releases potent methane gas, a greenhouse gas, which contributes to global warming.

Unlike the traditional composting that is done by placing organic waste into a compost bin or a compost pile, worm farming uses earthworms to beak down household organic waste and turn it into compost.

What is a Worm Farm

A home worm farm is in essence a worm composting system. It uses different types of earthworms to decompose organic waste and turn it into Vermicompost.

Worms are miracles of nature. The cylindrical body of the worm is brimming with bacteria and enzymes. The end product produced by worms breaking down and expelling organic matter, is called Vermicast. Worm casting can then be used as an organic fertilizer to improve garden soil.

The Benefits of a Worm Farm 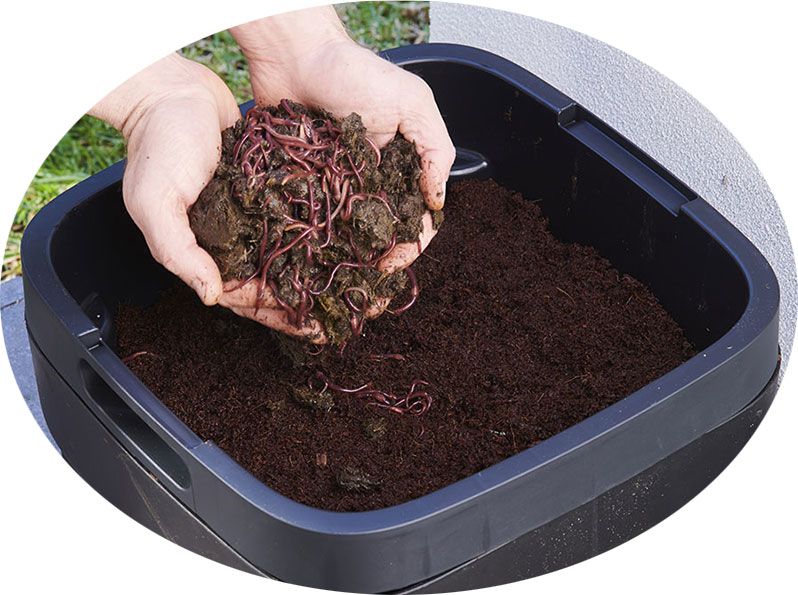 What Can You Compost in a Home Worm Farm

Worms will eat almost any kind of organic matter.

Here is a list of typical household waste items that can be placed in a worm farm:

Avoid adding these items in your worm farm:

Earthworms are delicate living creatures that can be badly affected by the growing environment provided. Some acidic food scraps can harm them and other are not easy for worms to eat. Some of these items can still be composted, but using a Bokashi Bin is more suitable in this case.

One of the tricks to worm farming is to remember that variety matters. If you offer a wide array of materials for your worms to feed upon then they will create nutrient-rich castings. Also, whenever you give food to your worms, sprinkle a handful of soil from your garden on the food because the worms need the grit from the soil to effectively grind up and digest the food waste.

The Maze Worm Farm compact design means that you don’t need a great deal of space and can get started on composting even if you live in a small apartment. This Worm Farm weighs only 7 kgs when filled with worms.

The Maze worm farm stylish and customizable compact design, means it will easily fit in any area of your home. Place it on your balcony, in your garden, or on a deck. This trendy and stylish farm is made from recycled materials. It is built with two working trays, and you can rotate them to add more trays if needed. The rotating trays design helps to create greater volume which is needed as worms start their migration upwards to the top tray.

The weight of the worms and their castings then pushes the tray down to further compact the casting material in the lower tray and then the slow to climb worms will also start to migrate up creating optimum aeration throughout.

See The Maze Worm Farm On Our Shop 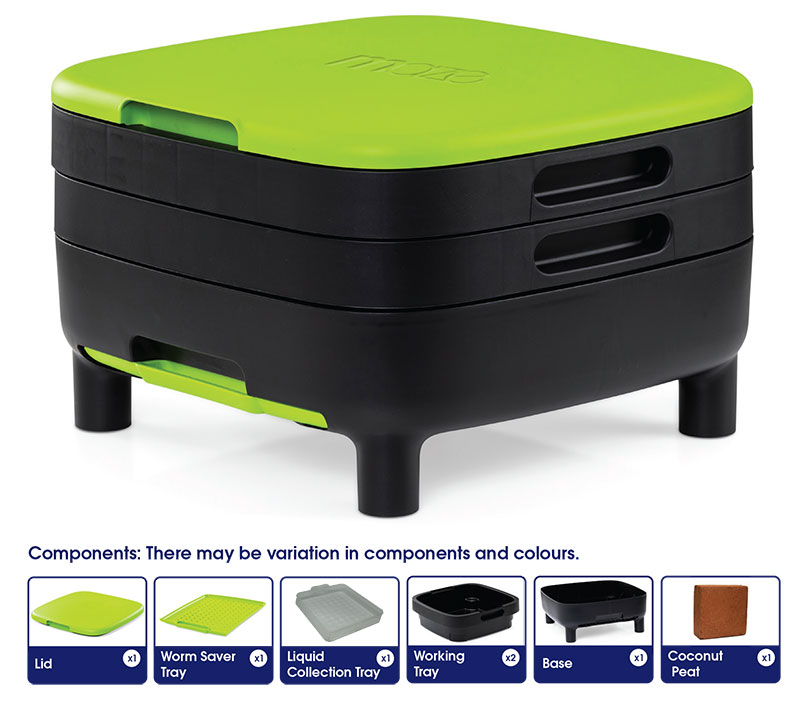 Setting Up the Worm Farm

Soak coconut peat in half a
bucket of water for 15-30
minutes. This will become
the bedding for your worms.

Start with the base – Install
legs if you have them (may
be sold separately).
Ensure worm saver tray
& liquid collection tray
are in place.

Put first working tray in
place and line with 2-3
sheets of wet newspaper
(not supplied). The second
working tray won’t be
needed until the first is full,
so keep in a safe place.

Add wet coconut peat to
the layer of wet newspaper,
this becomes the bedding
for your worms. Make sure
it’s not too wet or too dry.
The bedding should feel
moist with minimal water
dripping out when you
squeeze it.

Now it’s time to add your worms
(may be sold separately). Place
them on top of the coconut
peat with any bedding that
came with them. Leave the
worms a week before adding
any food scraps. This allows the
worms time to settle into their
new home.

Ideally you should over them
with a worm blanket (not
supplied). The worm blanket can
be any fabric made from
natural, non-synthetics such as
hessian. Several sheets of
newspaper or cardboard can
also be used.

Place the lid on the worm farm
and put it in a cool dry area
away from the sun and rain.

Using Your 2nd Working Tray
When your first working tray is full
you can then add your second.
When two working trays are
being used the worms will travel
through the holes in the bottom
to find new food scraps. When
the second tray is full the first will
be full of casting to use on your
plants.

You will get 2 types of fertiliser from your worm farm, Worm tea & Castings.

This accumulates in the liquid collection tray at the bottom of your worm farm. This worm farm is designed to be free draining. This eliminates the risk of the liquid building up and potentially drowning your worms. It can be diluted 1 part liquid to 9 parts water. It should look like a weak tea.

You will find some casting on the pull out worm saver tray. But the bulk of this will be found on the bottom working tray. When the second tray is full the first will be full of casting to use on your plants. 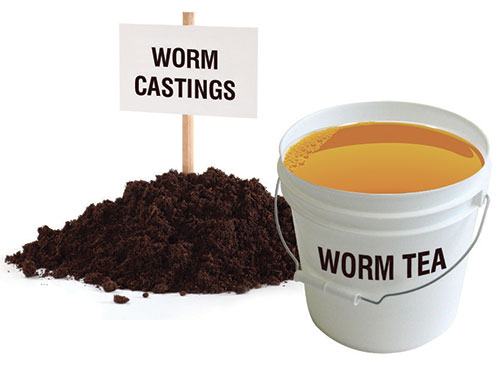 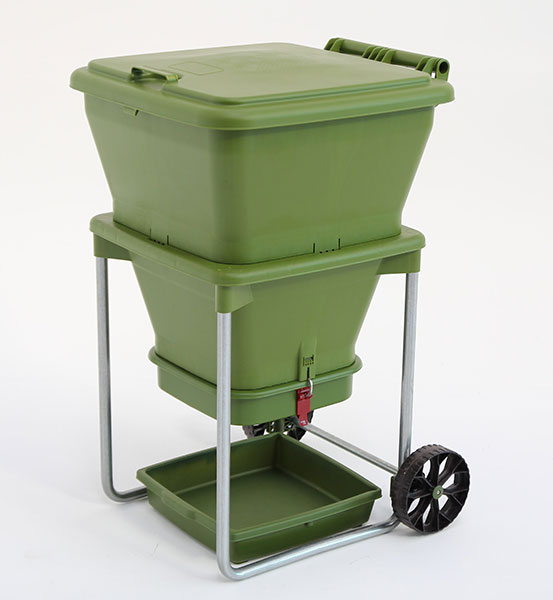 The hungry bin is a continuous flow system. When operated correctly, continuous flow systems are far more efficient than worm farms that use stacked trays. The unique shape of the bin creates a large surface area allowing all the worms living in the hungry bin to easily access the food scraps at the top – exploiting the fact they’re surface feeders, and increasing their processing capacity. The tapered sides also encourage the worms to stay on the surface, while compressing their castings below.

Once the compost process is complete, the hungry bin is designed to allow the simple and easy harvest of both finished castings and liquid fertiliser. Harvesting castings does not involve any heavy, messy lifting. The floor of the bin is easily removed, allowing approximately 4 litres (3/4 gallons) of castings to break away at the bottom of the taper. This allows the easy removal of finished castings from the bin. Removing the castings is a relatively clean process. Finished castings are largely free of worms.

The lid is at a comfortable operating height, and convenient to open and close. Tight fitting, it prevents pests from entering but has sufficient venting to create healthy airflow. The hungry bin even has wheels, making moving the bin light work.

See The Hungry Bin Worm Farm On Our Shop 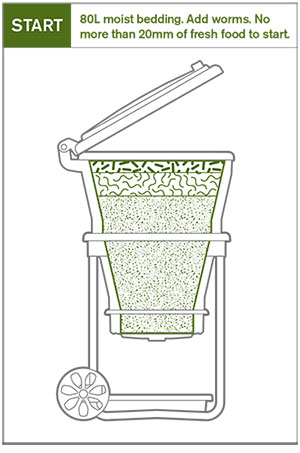 START: Fill your hungry bin ¾ full with
bedding material (80L of compost, free
draining soil). Moisten with water and add
at least 2000 worms. Add 20mm of fresh
food and cover with a sheet of newspaper or
cardboard. Place your hungry bin in a sheltered
shady spot — out of the sun if possible. 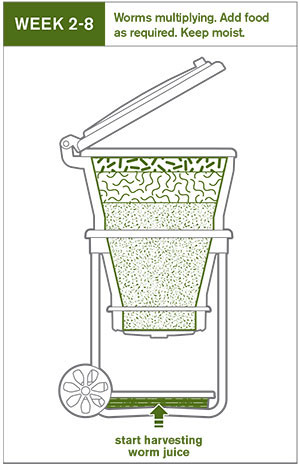 WEEK 2-4: Feed the bin slowly at first, only add
food as fast as it is being eaten. There may only
be minimal worm activity. Add more food only
when half the food has been eaten. You may
notice the food becoming mouldy, or other insects
present in the top of the bin.
WEEK 4-8: Feed every few days, but don’t add
food until half the previous layer of food has been
eaten. It is important that the worms eat the food
before it becomes rotten and smelly. Sprinkle with
water if the bin is becoming dry, or liquid is not
draining from the bin. 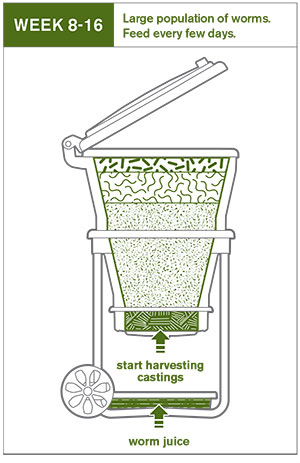 WEEK 8-16: Feed every 2-3 days, ensuring that
the uneaten food is no more than 50mm deep.
Worms should have doubled in population by
now, there will be a noticeable increase in activity.
You see worm castings (fine dark looking soil)
accumulating around the food. 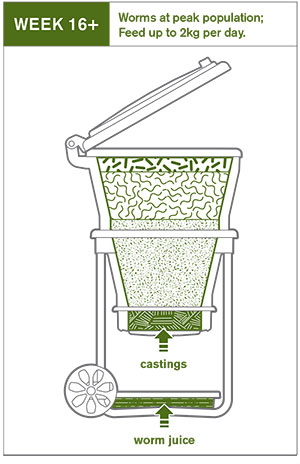 WEEK 16+: Feed every day or 2 as required;
worms should have formed a large active layer
immediately below the food. The hungry bin
should reach optimum performance and
maximum population – over 10,000 worms!
Take care to ensure the food is not rotting
before the worms have a chance to eat it.
If needed add fibre to help balance the farm,
(shredded paper,cardboard, dry leaves or dried
lawn clippings)to help keep your hungry bin
smelling sweet.